One thing many Sandhills Community College basketball followers probably learned over the weekend is that Rochester, MN is 1,150 miles away from Pinehurst.

The information became relevant after the Flyers rallied back from a 14-point first-half deficit to defeat Prince George’s CC 88-84 in Saturday’s District 7 championship game at the Hangar. The win earned Coach Mike Apple’s squad the right to become one of the eight teams that will compete for the NJCAA Division III National Championship at the Regional Sports Center in Rochester on March 14-16.

Donnie Haith scored a career-high 29 points to help spark the Flyers’ 24-point turnaround from the large first-half deficit to a 10-point lead with six minutes remaining in the game. The Owls from Largo, MD had closed to within one point at 85-84 with 45 seconds left before Haith converted three of four free throws on consecutive trips to the line to complete the scoring.

The last 13 Flyer points actually came from the charity stripe where Haith, Chase Morrisette-Barnett and Sayaun Dent were a combined 13-for-16. The Flyers improved to 23-8 while the 10th ranked Owls completed their season with a record of 22-6. 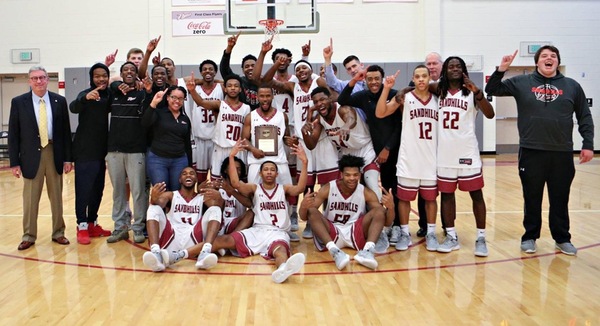 An about-average three-point shooting team on the season statistically, Dexter Turner sank four in a row as the Owls jumped out to a 13-6 lead. With seven minutes remaining in the half, the Flyers trailed 33-14 after Jalen Robinson made his team’s eighth trey.

“There was definitely some doubt going through our minds,” Morrisette-Barnett said. “They were probably one of the more talented teams we played all year. But we knew that when they came out early and hit all those shots that they probably had given us their best shot.

“I didn’t think they could shoot like that for the rest of the game. I thought if we didn’t turn the ball over and took good shots we could get back in the game.”

The Flyers clawed their way almost all the way back before the intermission. In the middle of the rally, a flagrant foul was called against the Owls as Haith attempted a layup in transition. He made the two free throws and then turned the sequence into a five-point play by draining a three off the subsequent inbound pass.

Momentum Remains with the home team

In spite of the Owls’ 9-for-18 shooting from behind the arc in the first half, Apple was not inclined to alter the pre-game strategy of containing the penetration threat posed by Alex Morales and Tunde Scrivner. The pair accounted for 31 and 16 points respectively in Friday’s semi-final win over West Georgia Tech.

“I told our guys that at this time of year you have to play the percentages,” the coach said. “I was really impressed with the way that team gave us a hard road to hoe in that first half. I think their cooling off, and our staying the course with what we wanted to do, had a big impact on the game.”

About five minutes into the second half, Dent scored two baskets in a row off passes from Holt Walker to put the Flyers in front 53-51. The 6-foot-7 Walker was in the crowded post area on the second one and cleverly flipped the ball over his shoulder to Dent for a layup.

“I try to get as many people on the floor involved as I can by hitting the open man,” Walker said after being credited with his third and fourth assists of the game.

At the nine-minute mark a pair of free throws by Devian Smith gave the Flyers a 68-59 advantage. With 6:07 remaining, a three by Walker produced their largest lead at 75-65.

“We trusted one another,” Dent said. “We knew anything was possible when we play together.”

Moments later Morales fouled out with eight points after going 3-for-12 from the field. Apple said that the Flyers did the job on the Owls’ star by committee.

“We noticed that they would go with a small line-up and a large line-up,” the coach said. “When they went small we put either Chase or Tyrell (Allmond) on him. With the bigger lineup we used Sayaun or Damauri (Sexton).”

Heading into the final four minutes of the game, the Flyers had made just 10 of 23 free throws. The Owls sent them back to the charity stripe again and again down the stretch while making some late threes to get back into contention.

Morrisette-Barnett was 4-for-4, Dent was 3-for-4 and Haith was 6-for-8, during that period including the one that made it a two-possession game with 1.3 seconds remaining.

“I prepared myself all season just for times like this so I wouldn’t fold or be nervous,” Haith said. “I just knew I had to play hard and give it my all to win this game. Getting to the national tournament has been one of my goals.”

Apple added, “The thing about Donnie is that he really wanted to be on the foul line at the end. “He stepped right up there and that’s a big deal.

“I thought our kids did a great job of building the lead from about the 10-minute mark to the six or seven-minute mark of the second half and then kind of holding on. I told them I wanted them to be resilient, and to play aggressively and hard for 40 minutes. I think we did that.”

Dent finished with 16 points and 12 rebounds. In early foul trouble, Walker had 11 points and nine rebounds in a productive 15 minutes of action. Morrisette-Barnett and Sexton were also in double figures with 11 and 10 points. Smith led in assists with seven. The Owls finished with 15 threes, but were just 6-for-17 in the second half.

Cutting Down the Nets

After the biggest basketball game in the short history of the Hangar, many of the Flyer faithful stayed around to watch the players and coaches, one-by-one, snip off pieces of the net. One of those looking on was T.J. Gill who was a member of the 2012 team that won the national championship in Loch Sheldrake, N.Y. in Apple’s first season as the coach. The Flyers also made it to the tournament in 2015 when they finished in seventh place.

Apple’s plan is to resume practices on Tuesday. The team is scheduled to fly to Minnesota on the following Tuesday and hold a practice there on Wednesday. The three rounds of games begin on Thursday.

Resident’s of the third largest city in Minnesota woke up to a temperature of 10 below zero on Sunday. Also as of early Sunday, Rock Valley CC, IL (23-6) and Richland College, Texas (22-5) had also qualified for the championship.