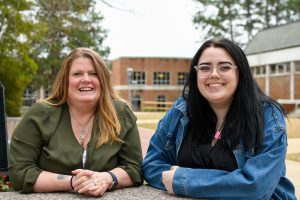 Students who take Professor Cathy Kruska’s public speaking class learn valuable skills they can put to use in real-world settings. Maggie Duskin, a non-traditional student at SCC, can attest to this.

When Maggie stepped up to the podium before the National Capital Memorial Advisory Commission in February, she was nervous. She was there to speak in support of a memorial for those who served in the Global War on Terrorism (GWOT). “It will honor those that have given the ultimate sacrifice,” she said, “the thousands that have served, the families that have multiple service members that are still fighting. This will be a unique and first of its kind memorial because the war is still going on and has been fought in so many countries.”

“The speech before the subcommittee was very emotional, as I was telling my family story of losing my husband, my oldest son bringing him home, and my youngest son going into the Army eight months later.”

Her husband, Chief Warrant Officer II Michael Duskin, “Big Mike,” was killed in Afghanistan while on his seventh combat deployment in support of the GWOT in October of 2012.

In her speech to the subcommittee, she told them, “He was 6’7” and 280ish pounds. He lived and breathed to defend our country. His dad once asked him why he continued to deploy when he could have easily taken an instructor’s job. His reply was, ‘I will continue to take the fight to the enemy’s door so that my country and family doesn’t have to fight on their homeland.’”

She talked of the sacrifices her family has made. “I have a daughter at home who is only 18 years old, and together we have sent our boys off on 16 deployments. There has never been a time in my daughter’s life when a family member or someone she knows has not been deployed in direct support of the GWOT.”

In her speech, Maggie said that this memorial “…would allow all of our citizens who have served, are serving and will serve to be honored in a way that is fitting of people like my husband, sons, and all that live in my community…They need to know that their country loves and honors them, and they need to be able to take their children and grandchildren to that place so that stories can be told and the scars of surviving, when so many haven’t, can heal.”

Professor Kruska gave Maggie valuable insight on how to stay calm, regroup, and manage public speaking anxiety for this speech.

“When I remember to slow down and think before I speak, I can actually formulate well-thought-out sentences. Because of the diversity in the classes, I am learning to look at the younger people’s perspective as well as the more informed and better-educated views,” she said.

These insights have proven valuable in her job as an executive officer of the Duskin & Stephens Foundation (DSF), created to honor Mike and his teammate, Riley Stephens. Stephens was killed in September of 2012 while also deployed to Afghanistan.

The foundation’s mission is to support the families of fallen operators, including healing programs and youth scholarships.

Although it had been over twenty years since Maggie had been to school, attending Sandhills wasn’t intimidating. “I love the campus, the various age groups, and backgrounds that you find… Sandhills is so user-friendly and helpful, especially for people that are going back to school after a long hiatus.’’ She decided to pursue an Associate in Arts and an Ophthalmic Medical Personnel diploma.

Maggie isn’t alone at SCC – her daughter, Lexie, also attends. She’s in her first year as a Cosmetology student. After completing the Cosmetology program, Lexie hopes to obtain a business degree and teach workshops and classes. Like her mom, she enjoys helping people.

Teresa Taylor, the coordinator of Veterans Affairs, was a tremendous resource to Maggie and Lexie. Teresa educates active duty, veterans, and dependents about their benefits and the best way to use them, provides program information, and assists veteran students, spouses and dependents in many other ways. She guided Maggie and Lexie through paperwork and called them with follow-ups and reminders. They reported that Teresa’s help was very useful, as the two of them lead busy lives.

In addition to Maggie’s role with the DSF, she serves as a GWOT Memorial Foundation ambassador. As a Gold Star Family liaison, she helps families through the healing process and memorializing the lives of those they lost.

Maggie spends her spare time traveling or attending non-profit events while keeping her menagerie of pets happy. Between her and Lexie, they have four dogs, three cats, and a zoo of small animals.

Maggie has taken what life has presented to her and used it as an impetus to help others. Her inspiration comes from her kids, close personal circle of friends, the DSF team, and keeping her eyes on her goals. The GWOT Memorial is awaiting approval for a construction location in Washington D.C. After this determination, a competition will be held for the memorial’s design.

“I want people to say and think I took a bad situation and am doing something positive with it. To know that DSF has helped families get a better education for their kids, to be a part of the building of a national monument in our beautiful Capital, that’s a legacy that my husband and our fallen deserve.”