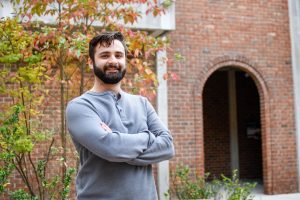 Trading an Air Force uniform for medical scrubs assures each day will hold something different for Dylan Jones. From lectures, labs, and clinical hours that begin at 6:30 a.m., Dylan has risen to the challenge of studying to become a nurse.

Dylan grew up in the area and graduated from Pinecrest High School. After graduation, Dylan enlisted in the Air Force where he stayed for six years. He was assigned to aircraft maintenance and worked on planes including AC-130s.

Dylan was stationed at Hurlburt Field Air Force Base in Florida and deployed to Afghanistan twice on six-month rotations. Initially, he planned to spend his entire career in the military but decided to transition out. While speaking to his mother, she commented that he would make a great nurse. She knows the career well – she’s been a nurse for about 30 years.

Dylan looked into the career and decided to pursue the program at Sandhills Community College. “The faculty and facility are wonderful.” Professor Heather Cox stands out to Dylan. “She is a sublime individual and an excellent teacher. We are blessed to have her presence on campus.”

Another person on campus who Dylan singles out is Teresa Taylor, Veterans Affairs coordinator. “Mrs. Taylor is wonderful…she devotes a lot of time and care to help the veterans get their full benefit and the amount they’re allotted. She’s always inviting.”

It’s partially due to his experiences in the Air Force that pushed Dylan to obtain his degree. “There was always a drive for further education,” he said, “Especially when you’re working on multi-million-dollar aircraft!” The demand for knowledge and understanding inspired him.

The techniques and protocol that Dylan is taught at SCC differ slightly from what he learned in the Air Force. Instead of inspecting engines, he’s learning how to properly assess patients, administer medications and the processes of returning the critically ill back to health.

However, the mindsets they both require aren’t that different. Both demand attention to detail, accuracy, of course, steady hands. After graduation, Dylan hopes to become a physician assistant. We’re looking forward to seeing where he lands.