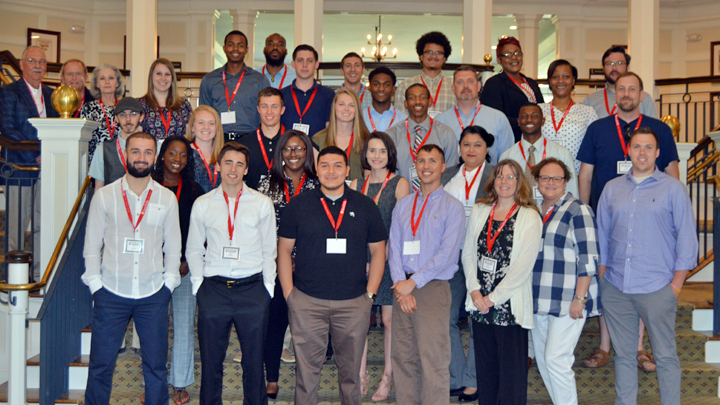 When Jon and Jackie Giles approached Sandhills Community College President John Dempsey with a simple idea, they proved that remarkable things can happen when philanthropic impulse meets a group of gifted young scholars. The result was The Giles Leadership Academy held at the Pinehurst Members Club in April.
Top graduates from over 28 SCC programs, the Student Government Association, and the athletics program converged for a daylong four-part leadership-development regimen—combining scholars, humanists, and civic leaders as the framework for building 21st-century leaders.
Dempsey opened the day by asking the students to look out the window and down the fairway of Pinehurst #2 and notice how an empty field had been transformed to one of the leading golf courses in the world. He then took the students on an explanation of how key figures—men with vision and purpose—transformed a small patch of rural North Carolina into an unrivaled resort. That conversation concerning leadership and the necessity of vision set the tone for the day.
Roy Reza, a student in the SCC University Studies program, said, “The event was an eye-opener that broadened my possibilities and gave me new-found confidence. I learned I had leadership characteristics and qualities I was not aware of.”
Major Jason Howk (Ret.) introduced the group to the history of former Pinehurst citizen General George Marshall, who may well serve as the perfect American example of service leadership—at war, at peace, and at home in the Village of Pinehurst. The young soldier took students on a snapshot journey through General Marshall’s career as a military leader and statesman, exposing them to the logic and self-sacrifice that are required of great leaders. He closed with the portrait of a humble, aging statesman finding his final purpose in the simple role of a village citizen who took time for others.
Habitat for Humanity’s servant leader, Amie Fraley, provided the compassionate leader element to the day’s agenda. She guided the assembled scholars through her personal journey from the safety of an accountant’s “comfort in numbers” life into the sometimes scary, often challenging, and ultimately the life-changing role of a leader in one of the region’s most impactful non-profit organizations. Focusing on the need for fulfillment in life, she described how the “reluctant leader” often emerges from the shadow of self-doubt to become the voice of those who too often fail to speak for themselves.
Darell Yates, a graduating student from the Health and Fitness Science program, mentioned that “listening to Amie tell her story about going from being an accountant to a service leader made me realize you should always follow your dream and do what fits you best and make sure you are having fun doing it.”
SCC graduate Zachary Erickson, scarcely three years out of his classes at Sandhills and one year into his career following his bachelor’s degree at UNC Chapel Hill, personalized the leadership journey as he traced his timid beginnings. He noted his surprise at finding that the intellectual paths out of the economic and social challenges of his childhood could be attributed to a few individuals who believed in him and in his ability to find a new path. His message of the unexpected trails that take a student to undiscovered gifts was a welcome perspective on what lies ahead for this group of graduates who will soon embark on careers or academic advancement.
Heather Hunt, one of the attending students, said of Erickson, “I was very appreciative of his willingness to share his story as a C-Step graduate. I was very impressed that he was so relatable and willing to talk about the hardships of being a student who was and is close to my age.”
Mary Bridschge, SCC Director of Curriculum Programs and Leadership Development, closed the day’s event by asking each student to venture past the fear of self-disclosure. Each student presented an “inconspicuous aspect of self” that might help others to better understand the person behind a shy smile or a quiet hello. The room filled with laughter and tears as 28 students and the event hosts dared to say aloud hard truths that might prove pivotal in shaping a new leader.
Mahogony Williams, a Human Services–Substance Abuse Concentration student, said, “I really enjoyed the activity we did with Mrs. Bridschge; it was awesome, and I felt very connected to the students knowing something about them we would not have known had we not shared.”
At the close of the program, each student was given a chance to meet the event hosts, Jon and Jackie Giles, who honored each graduate with guidebooks for new leaders.