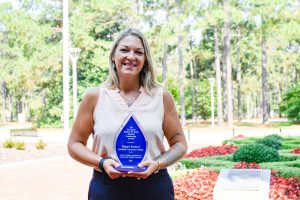 In 2004, the North Carolina Association of Community College Presidents created the award as a way to recognize student leadership on a statewide level while also honoring former Governor Bob Scott. Governor Scott served as the State’s chief executive from 1968-1972 and then was president of The NC Community College System (NCCCS) for 12 years from 1983-1995.  Governor Scott passed away in January of 2009, but he was very humbled that the system named a student award in his honor.

This award was designed to highlight outstanding curriculum student leadership and service. Each community college nominates one student who is enrolled at least half-time, in good academic standing, and has a current grade point average of at least 2.5. Nominees are active in campus activities and possess traits that will help them be or become leaders in their communities. Applicants were considered and award winners were chosen by the NC Instructional Administrators Association.

“Education equals opportunity,” said NCCCS President Thomas Stith. “Clearly these students excelled beyond their program classes to become award winners in leadership, which shows promise in great opportunities as these students further their education and enter the workforce. Well done to all.”