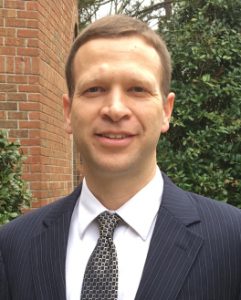 Aaron Denton, Athletic Director at Sandhills Community College, has been named the Junior/Community College Under Armour Athletics Director of the Year by the National Association of Collegiate Directors of Athletics.

“This is an incredible honor,” said SCC President John Dempsey, “and it is well-deserved. Aaron has built our athletic program, from scratch, into one of the most successful programs in the country – and he’s done it with dignity, integrity, and a genuine dedication to the mission of Sandhills.”

Prior to this announcement, Denton had recently accepted an offer to become the Athletic Director at North Carolina Wesleyan University in Rocky Mount. He will supervise 14 athletic teams at Wesleyan.

“Sandhills is about excellence and opportunity and about developing people,” said Dempsey. “While we will miss Aaron terribly, we are very, very proud of him. We wish him only the best as he, his wife Ami and their family pursue this wonderful opportunity.”

Denton will begin his responsibilities in May at Wesleyan. “The opportunity to lead the athletic programs at Wesleyan is an exciting challenge as they have recently added several sports and plan to continue in that direction. The college is the fastest growing private college in NC over the past three years.

“Sandhills has supported many opportunities for myself, our coaches and student-athletes,” said Denton. “Being a part of those efforts remains special for my family and me.”

Denton came to Sandhills in 2008 from Louisburg College where he had rebuilt the basketball program, placed athletes at four-year universities, and spearheaded fundraising efforts. He had also been an Assistant Coach at Miami-Dade College and UNC-Greensboro.

With Denton’s hire, the college began offering women’s volleyball, men’s basketball and men’s and women’s golf. Hein’s Gymnasium was enlarged in 2015 to accommodate NJCAA basketball play. Before the renovation, games were played at The O’Neal School. Men’s and Women’s Cross Country was added in 2017, finishing in the top ten in the nation their very first year.

In addition to his duties as the Athletic Director at Sandhills, Denton also works as a Mathematics instructor. His wife Ami attended the college and served as the Student Government Association President. In addition to a bachelor’s degree in education she earned from Appalachian State University, she obtained an Associate Degree in Nursing from Sandhills and later taught in the nursing department prior to accepting a full-time position at Central Carolina Community College.

The Denton’s have two children, nine-year-old Savannah and Noah, four. They will reside near Denton’s hometown of Bunn, where two happy grandparents await their move.