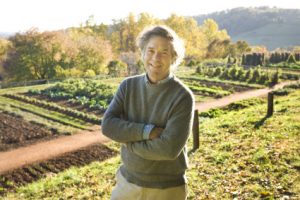 Distinguished Alumni are unique individuals who have been chosen and recognized for their outstanding contribution to their profession and their community. They have made substantial contributions for the good of others and have served as a positive motivational force for those around them.

Hatch will be one of the speakers at commencement on Saturday, May 12.

A gardener and historian living in Albemarle County, Virginia, Peter Hatch gardens, lectures, consults, and writes about garden history. From 1977 to 2012, he worked as the Director of Gardens and Grounds for the Thomas Jefferson Foundation where he was responsible for the maintenance, interpretation, and restoration of the 2,400-acre landscape at Monticello.

In his time at Mr. Jefferson’s home, Hatch conceived and oversaw numerous educational programs, including Monticello Garden Tours (for 35,000 annual visitors); the Saturdays in the Garden program of natural history walks, lectures, and horticultural workshops; and the Historic Landscape Institute, a two-week field school for students from around the nation.

A native of Michigan, Hatch obtained an English degree from the University of North Carolina at Chapel Hill in addition to his associate degree from SCC. He received an Honorary Doctorate in Humane Letters from St. Lawrence University, Canton, New York. Between 1974 and 1977 he served as a horticulturist at Old Salem in Winston-Salem.

In 2011, he received The Garden Club of America’s Medal in Historic Preservation, the first horticulturist to receive the award, and in 2012, he was awarded the Flora Ann Bynum medal, the highest honor bestowed by the Southern Garden History Society.

Peter Hatch is married to Lucile Brandt Hatch, and they have two daughters, Rosemary (26) and Olivia (23).