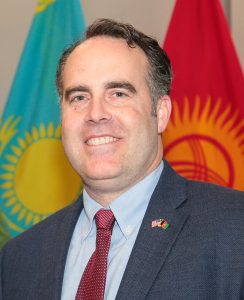 Beginning on April 3 and running through May 1, Jason Howk will lead a Continuing Education Creative Living class at Sandhills Community College, US Counter-terrorism Policy 1970-Present. This updated class will meet on Wednesdays from 10 a.m. until noon. This course will introduce students to America’s evolving policies for countering terrorist groups. Topics are to include the 2018 Counterterrorism (CT) and 2017 national security strategies, the evolution of CT policy since the early 1970s, and an assessment of numerous presidents’ efforts to decrease terrorist motivators.

Recent films have captured a range of scenarios in modern warfare. Also join Howk as he explores four post-September 11 films depicting war that tackle Post Traumatic Stress, terrorism, mercenary warfare, and special ops. The class will begin on March 20 and be held on Wednesdays through April 10 from 2-4:30 p.m.

Major (retired) Howk is an Afghanistan War veteran. He was a South Asia Foreign Area Officer, enlisting as an infantry paratrooper in 1991 and also serving as an Engineer Officer. Of his 23 years in uniform, he spent over 12 years contributing to the Afghan Campaign and still does so today in a civilian capacity.

Howk is the author of “The Qur’an: A Chronological Modern English Interpretation.” He is a Malone Fellow in Arab and Islamic Studies and was a member of the Council on Foreign Relations. He earned a Master’s in Middle East and South Asia Security Studies from the Naval Postgraduate School and studied Dari and Arabic languages. As a specialist on Afghanistan and the Middle East, Howk has worked with several Generals and Ambassadors on strategic and policy issues in Afghanistan.

He is also the host of an introduction to Muslim Culture podcast called  “We’re Just Talking About It,” a public speaker, and a non-profit leader helping military families and endangered wildlife.

International Relations provides a study of the effects of ideologies, trade, armaments, and alliances on relations among nation-states. Emphasis is placed on regional and global cooperation and conflict, economic development, trade, non-governmental organizations, and international institutions such as the World Court and UN.

American Government is a study of the origins, development, structure, and functions of American government. Topics will include the constitutional framework, federalism, the three branches of government including the bureaucracy, civil rights and liberties, political participation and behavior, and policy process.

To take Howk’s curriculum classes, new students are to apply to the college from the link found at the top of www.sandhills.edu. If you wish to earn college credit, you must submit all high school and college transcripts before registering.