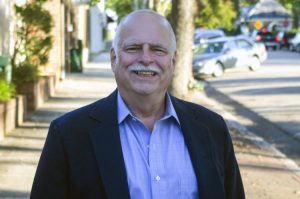 When Carthage resident Kevin Lewis was nine years old, his mother introduced him to actor Montgomery Clift on East 67th Street in 1958.

“We didn’t know him, but he asked my mother if I was a child actor going to an audition because he noticed I was sharply dressed and because he had started his own career as a juvenile actor. He said I reminded him of his earlier life walking those Manhattan Streets carrying play scripts.”

Little did Lewis know that his chance encounter with a famous actor was an introduction to the life he would lead in the decades to follow. A college history major, he would emerge as a Hollywood journalist/historian whose brushes with cinema stars, directors, crew members, and writers are now compiled in a new exhibit at the Hastings Gallery in the Katharine Boyd Library at SCC.

“My Life Among the Stars” chronicles Lewis’ interviews, profiles, and historical analyses of some of the premier Hollywood names and films from the careers of Milos Forman, Robert Altman, Anjelica Huston, Helen Hayes, Jessica Tandy, and countless others who shaped the Golden Era of the silver screen.

Lewis’s focus in life shifted to journalism in the 1980s when he was a feature writer for The Fayetteville Observer for eight years. He followed that as lifestyles editor of The Sandhills Citizen. However, it is as a film aficionado that Kevin found his greatest success as a journalist/historian.

The Hastings Galley exhibit features Lewis’ most extensive collection of pieces from CineMontage: Journal of the Motion Picture Editors Guild. His “This Month in Film History” column provides a fascinating panoply of film, actor, and guild member profiles. In his writings, Lewis’ focus was not just cinema, as the exhibit showcases. “For twenty years, I was a features reporter for DGA Magazine and the Motion Pictures Editors Guild, and, for four years, I was editor of Dance Pages, also known as Dance and the Arts.”

His earliest published articles were historical in nature because he sought out distinguished writers, directors and performers. “At the time, I worked backstage in theater and met several performers who were either on the way up, on the way down, or on a hiatus from a television series.”

Lewis’ writings transcend Hollywood. At one point, he called The Fayetteville Observer’s editor and said that he had the opportunity to interview Paul Green, the aged Pulitzer Prize winner who is legendary in North Carolina literature for writing The Lost Colony. Green was an adviser to the Fort Bragg Playhouse where Lewis worked. “That interview led to eight years as a daily feature writer. “During that period, I interviewed Natalie Wood, George Shearing, Gerald Ford, and a host of others.” His work locally also produced articles on some well-known names in the Sandhills: Stephen Smith, Glen Rounds, Doris Betts, and Manly Wade Wellman.

But Lewis’ great passion was film history. “‘This Month in Film History’ analyzed a landmark film on its anniversary month and year,” Lewis explains. “The film may have been ignored at the time of its release but became a cult film years later, or it may have proved to be an instant classic film which retained its legendary status, or an avant-garde film which influenced succeeding editors and directors who copied its technique.” The project became a years-long endeavor. “I wrote over 60 columns from 2006 to 2014.”

“Although COVID is preventing our usual opening reception, we have designed a touch-free show that should allow Lewis’ fans to ‘wander among the stars’ that were so much a part of his journalistic career,” says Tammy Stewart, Associate Dean of Library Resources.  “Kim Sigman, of our BPAC offices, spent countless hours digitalizing Lewis’ archives to preserve this important history of cinema.”

“What you will find is a remarkable chronicle of a gifted man whose career will serve film scholars for a century to come,” adds Micky Konold, Director of Public Outreach for Boyd Library. “The Boyd Archives was blessed to be able to compile such a remarkable collection of artifacts from a journalist/historian with ties to our region.”

“My Life Among the Stars” opens at 10 a.m. on Thursday morning, July 30, with Lewis available for a staggered reception in the Teresa Wood Reading Room. The exhibit remains open through August 16th.