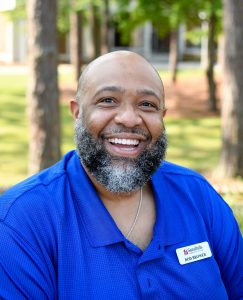 As the Chief Information Officer, Rod Brower manages the college’s ITS department. His department handles the computer systems, networking, programming, computer support, the phone and printing systems, and the website.

Rod attended SCC where he earned an associate degree in Business Management and another in Computer Programming. He worked as the college’s System Administrator for ten years and moved to FTCC for eight. He returned to work for Sandhills three years ago.

Growing up in Hoffman, Rod graduated from Calvary Christian School prior to attending Sandhills. He is quick to mention the lovely campus, “It is so nice to drive up to such a beautiful campus each day. I love the pines, except during pollen season!”

Rod is an accomplished vocalist. He has sung the National Anthem at the opening of a Durham Bulls game, participated in the Dr. Martin Luther King commemoration services in Atlanta, and has sung in Ireland with his community choir. Rod is also a vocal coach.

Rod enjoys traveling. Among his favorite places visited are Ireland, Costa Rica, and the Caribbean.

As a devoted son, Rod helps care for his mother, as he did his father before his passing a few years ago. He says he has a blended family (two dogs belonging to his parents and two of his own cats).