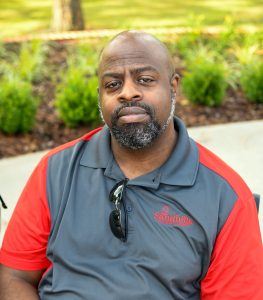 Even though Julian J. Carrington has been working at Sandhills for only two years, he has discovered what most employees know. In his own words, “The people at SCC are awesome!” He adds that there is an inherent sense of teamwork and never a shortage of friendly encounters at every turn.

Receiving a Bachelor of Science in Computer Science from UNC-Charlotte, Julian’s job title is Information Technology Analyst I. He manages the college’s Adobe Creative Cloud access, Symantec endpoint protection, Deepfreeze, and Impero. He administers updates when needed, troubleshoots, and assists with printer management.

Julian is actively raising three sons, and they all are diehard Panthers, Hornets and Hurricanes fans. They also enjoy comic books and live adaptations of them.