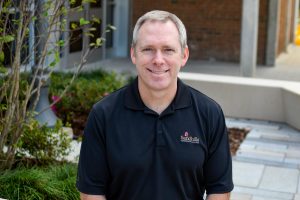 Originally from Hudson Valley, New York, the US Air Force brought Dan Shea to the area. Two years later, he was wed and settled here after serving his military commitment. Dan has worked for 20 years as the Printing and Office Supply Services Coordinator. He handles the printing needs of the campus and orders and distributes office supplies.

“SCC feels like the idyllic college campus,” says Dan. “The environment and charm of the campus make it a special place to work.” Dan even earned an Associate in Science in Web Technologies from the college.

Most of Dan’s time outside of work is spent with his family. His wife is a teacher at New Century Middle School, his daughter is in the RIBN Nursing program at SCC, and his son is in the Computer Engineering Technology program. They have two other children and five dogs.

Dan also likes to watch hockey and lacrosse, play the guitar, and is a self-professed Bible nerd.