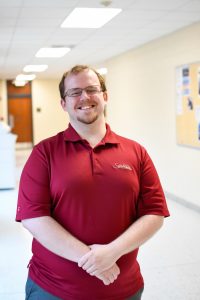 Brandon Hussey, the college’s Information Technology Analyst, began at the college as a Computer Support Specialist five years ago. He now works the helpdesk, troubleshoots the network, installs and configures hardware and software, and works with vendors on various projects.

Brandon was a student at SCC when he realized what a special place it is. “My instructors Diane Innes and Johna Parker had so much patience with me; they made me feel like I belonged at Sandhills.”

I wanted to give back to the place that gave me so much, but I never imagined I’d be working here the following year!  I’ve been able to see both sides of the college as a student and then as an employee, and it is indeed the people that make the college what it is.”

Brandon holds an associate’s degree in Programming from Sandhills, one in Network Administration from Randolph Community College and a bachelor’s in Networking Design from Strayer University.

Brandon had developed an interest in how languages are formed and why they follow the rules that they do and hopes to one day learn German, Japanese or Spanish, maybe all three. He has also been learning bartending.