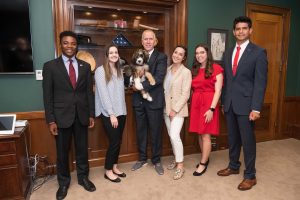 On March 26, 1967, Martin Luther King Jr. spoke at Barratt Junior High School in Philadelphia. In the speech, “What Is Your Life’s Blueprint?” he said, “I say to you, my young friends, doors are opening to you – doors of opportunities that were not open to your mothers and your fathers — and the great challenge facing you is to be ready to face these doors as they open.”

This quote rings true to Raymond Villalobos, a 2020 Sandhills Community College graduate. “My parents did not have the same opportunities, education, and freedom that I get to experience,” he said. “Therefore, I seize every day and encourage others to do the same.”

Villalobos recently wrapped up an internship in Washington D.C., where he interned for North Carolina Senator Thom Tillis. “I found myself lucky to have unique opportunities like taking photos with Bernie Sanders and Elizabeth Warren, sitting in the Senate gallery while Vice-President Kamala Harris was presiding over the chamber, and I even had the chance to shadow Senator Tillis for a day.”

His duties in Washington included sorting through mail, answering phones, writing memos for the senator, conducting legislative research, and responding to constituents. “I still find myself in awe when I see senators in person because I am so used to watching them on television giving a speech or debating about policy,” Villalobos said.

One of his most memorable days was when he and the entire intern staff were allowed to gain Senate floor access and observe the Senate as it was in session. “It was interesting to observe as they talked with each other, shared jokes, and voted for a floor bill,” Villalobos said. “This was an amazing once-in-a-lifetime opportunity.

“The education I received from SCC has given me the necessary skills and courage to be successful in my pursuit of a meaningful career in legislative politics,” said Villalobos. “Through the variety of classes and public speaking opportunities offered at Sandhills, I was able to develop strong interpersonal, interdisciplinary, and leadership skills,” Villalobos explained.

When he was a student at SCC, Villalobos would hand out candy to fellow students to break the ice and begin a conversation. He made the same gesture on Capitol Hill but with North Carolina sweet potato chips and peanuts provided by the Senator’s office.

After graduating from SCC in 2020, Villalobos continued his education at a joint program between North Carolina State University and the University of North Carolina at Chapel Hill. He’s majoring in Biomedical and Health Science Engineering, focusing on regenerative medicine and minoring in political science. “My goal is to either bring an interdisciplinary approach to our government’s legislation or to be a leader in my community,” he said.

“Admittedly, my future is still uncertain, and no one can predict what the future may hold,” Villalobos said. “I would like to see myself take another step into the political arena and pursue a meaningful career in legislative politics at either the federal, state or local level.”