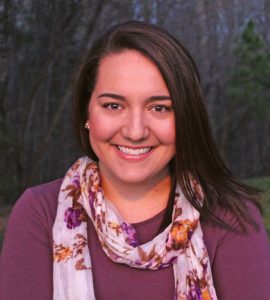 Graduating from Sandhills Community College in 2008, Angela Carroll Roberts has a message for people skeptical of community college: “Break the stigma!”

Although her degrees are from The University of North Carolina-Wilmington, Angela is proud that she attended Sandhills Community College for two years before transferring. The small class sizes at SCC led to a better understanding in many subjects, which provided a better foundation for the university. It doesn’t hurt that she also graduated with zero debt.

“I received an excellent education for a lot less money. I wasn’t forced into a world I wasn’t ready for because of my young age (17). It was the perfect next step after high school. The instructors I had were exceptional and truly caring.”

Angela holds a B.A in Chemistry and M.S in Chemistry from UNC-Wilmington. While working as an analytical chemist for three and a half years, she realized that the pharmaceutical industry wasn’t for her, and it was while she was in graduate school that Angela realized she might like to teach. She began teaching at the community college level and later moved onto high school.

“While I was a graduate student, I worked as a teaching assistant for general chemistry labs. Students were changing their majors over not doing very well in one course – chemistry!”

“Now, my goal as a high school teacher is to give them a great foundation so that college level chemistry is easier for them, and so it doesn’t cause enough frustration to make them change their majors. I also hope to increase their scientific literacy and show them how the subject can explain so much about our lives.”

On top of her degrees, two scientific journals have featured her works: Surface Waters as a Sink and Source of Atmospheric Gas Phase Ethanol, published in Chemosphere in August 2015 and Determination of Ambient Ethanol Concentrations in Aqueous Environmental Matrices by Two Independent Analyses, published in the Journal of Analytical Chemistry in May 2013.

One of Angela’s favorite classes at Sandhills was Southern Culture taught by Ray Linville. “He’s an excellent instructor and his ENG-111 class made me a much better and more thoughtful writer.”

As a teacher and a successful graduate of SCC, we had to ask Angela what advice she had for current students and those getting ready to graduate. For current students: “Find the best study method for you and understand your learning style. Take more than 12 credits/semester if possible.”

For those preparing to graduate: “Ask a teacher in your content area if they are willing to stay in touch as a mentor. Those connections will be invaluable after college!”